When I was younger I wanted to be an archaeologist. I read stuff, volunteered on digs in all weathers, in the middle of nowhere… Then someone told me being an archaeologist was a labour of love and most time was spent in an office…so I became a counsellor instead.

But I still drag those around me off, frequently, to wonderful places (or “another pile of rocks in a field”) and love to muse on the significance of these resilient structures. 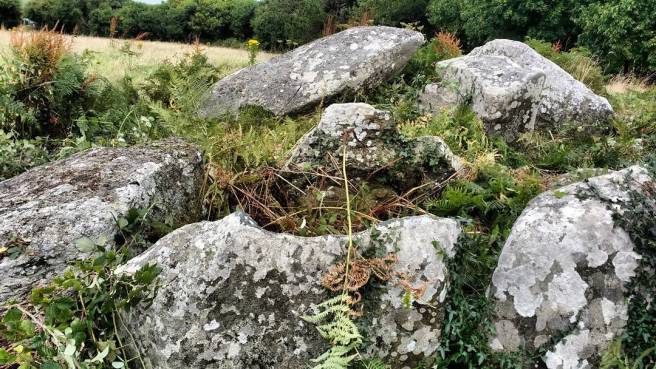 At Cerrig y Gof in Pembrokeshire recently we met a team making sense of Wales’ megaliths through writing, drawing and filming. And they fired up in me that feeling I had so strongly as a teenager: that I should have pursued archaeology.

It didn’t want to subside, that feeling, but sitting with it I noticed it change and unfurl like the Welsh bracken, and finally unfolded the pleasant realisation that I am sort of, a little bit, like an archaeologist.

I sit in my office surrounded by papers and theories, clues and hints.  And I make forays into connecting with complex structures, clearing a way gently to reveal the shape, orientation, wondering “what lies beneath”. Wondering about connections to similar types, wondering what belief systems shaped them, how they fit in the local and universal landscape. Wondering even whether now is the time to clear a path to them or whether actually, the feeling is to let alone for a while and peruse from afar, make tentative connections. Sometimes brambles and nettles are a necessary protection.

Some clients I am with for months and years, and the relationship becomes rich and deep, constantly evolving, throwing up surprising finds.

Sometimes the engagement is more fleeting – we get a general sense of shape, an outline, some features better understood, but no necessity for deeper exploration.

Sometimes I make mistakes, don’t see the way clearly, encounter a new feature and fail to understand it.

But every encounter helps me better understand the territory of human experience, just like an archaeologist, and shapes me.